Lockdown stops couples who took a surrogate route to parenthood from holding newborns.

For the last 12 years, Sheeba* and her husband have been trying to have a baby. Their dream came true last month when she had a baby through surrogacy, but life has been more agonizing for the couple. The couple is among the many who are unable to see their babies delivered by surrogate mothers since the country went into lockdown on March 24. In India, 5,000 to 10,000 babies are born through surrogacy every year.

“They had come down from Dubai to Kanyakumari and planned to come to Chennai a few days before the delivery,” says Dr Geetha Haripriya, fertility expert and chairperson of Prashanth Hospital. The surrogate was due to deliver by March-end. “Sheeba’s mother fell ill and the surrogate went into labour on March 17. By the time Sheeba’s mother recovered, the lockdown was announced. We’ve sent them photographs of the baby. We give them daily updates about the baby’s health,” said the doctor.

Dr. Shivani Sachdev Gour, fertility expert and founder-director of SCI IVF Hospital in New Delhi, says that four babies were born through surrogacy at the center in the past two weeks. “While two couples were able to come and get the children as they live in Delhi, two others have not yet seen their babies,” says Dr Shivani Sachdev Gour. “One of the couples is from UP and have had a girl after trying for 14 years. The other, from Rajasthan, has had a boy. Though we gave them letters from the hospital, they are unable to come as the areas they live in have been sealed off.” 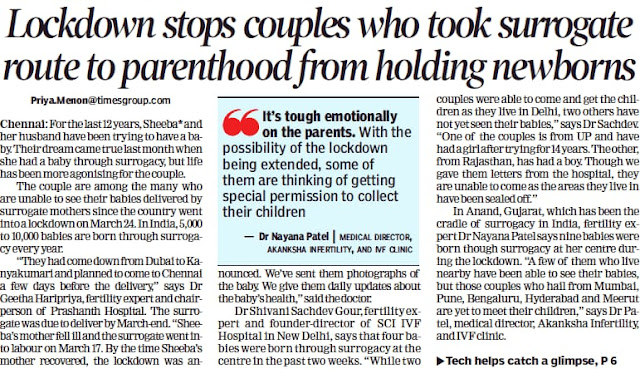 The government on Thursday sent the Surrogacy (Regulation) Bill, 2019, to a select committee of the Rajya Sabha for review. Click here to read the full article: https://www.livemint.com/news/india/surrogacy-bill-2019-referred-to-rajya-sabha-select-committee-for-review-11574347388503.html 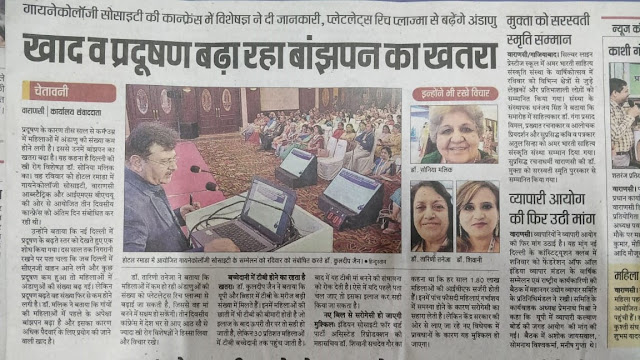 An old interview with Dr Shivani Sachdev Gour on the topic of How big is the surrogacy industry in India? What’s the future outlook?